National Assembly Speaker Justin Muturi has revealed that Raila Odinga and Uhuru Kenyatta’s only condition during their 2018 handshake is that they would retire together in 2022.

During an interview with The Standard, Muturi disclosed that Uhuru had told him they had agreed to end their families’ long political rivalry by both exiting the political stage in 2022. 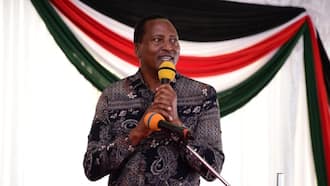 I Couldn’t Stay in Ford Kenya when I Believe in Voting for Raila, Richard Onyonka

“Thrice President Uhuru Kenyatta has told me that he was to retire with ODM leader Raila Odinga next year. That was the only condition of their handshake,” explained the speaker.

Muturi explained that if Raila announces candidacy on Thursday, December 9, he would be against their March 2018 pact.

The National Assembly speaker attributes Raila’s reluctance to declare his fifth stab at the presidency to his deal with Uhuru.

“Raila’s reluctance to declare his planned stab at the presidency is perhaps because of his retirement deal with Uhuru,” added Muturi.

Muturi also disclosed that Uhuru is yet to decide who he may support as his successor next year.

He explained Uhuru had hoped to use the Building Bridges Initiative (BBI) to organise his succession, but his plans were scuttled by the courts, nullifying the process.

“Uhuru has not decided on who he will end up supporting in the General Election… He might surprise many by not siding with any candidate. He had hoped that the OKA principals would be united to help him build a formidable alliance for 2022,” says Muturi.

He pointed out Uhuru’s plans got further complicated by some One Kenya Alliance principals who declared they would not support a Raila candidature.

The National Assembly speaker is among the few political friends the Head of State has maintained in his last days at the helm.

In another story, TUKO.co.ke reported that a section of Kenyans is convinced that President Uhuru Kenyatta supported former prime minister Raila Odinga for the presidency when they toured Kibra Wednesday, September 29, to commission two hospitals.

In Kibra, the president acknowledged that the former prime minister played a significant role in ensuring peace after the heated 2017 presidential election, which evoked chaos.

Courtesy of the handshake and tranquillity that followed, Uhuru said his government began delivering on its promises.

We Could No Longer Sacrifice Our Peace and Live in Pretence,...