The 21-year-old daughter of a Nakuru woman who was found dead after missing for 11 days has cried over the death of her mother.

The body of Veronicah Kanini was found buried in a shallow grave on the evening of Tuesday, November 23, after the prime suspect in the case led detectives to the place where he buried her.

Speaking to the press, the deceased’s daughter said she had hoped that her mum would be found alive and their hopes were undeterred because she was a good woman. 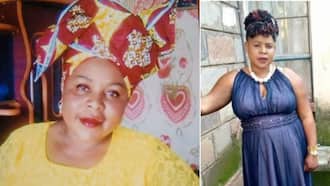 The 21-year-old said it was even harder to come to terms with her death because she had not prepared for the worst.

Her sister who was also devastated said it was possible the prime suspect did not act alone when he held Kanini hostage and demanded KSh 3,000.

“Her hands had been tied at the back and her legs were also tied. It is very obvious that he did not act alone,” she said with tears rolling down her eyes.

Solskjaer Still in The UK Days After He Was Sacked as...